Auroville: The Utopian city of India

Situated in the waters of Bay of Bengal, lies a city named Auroville, the French name for ‘the dawn city’. 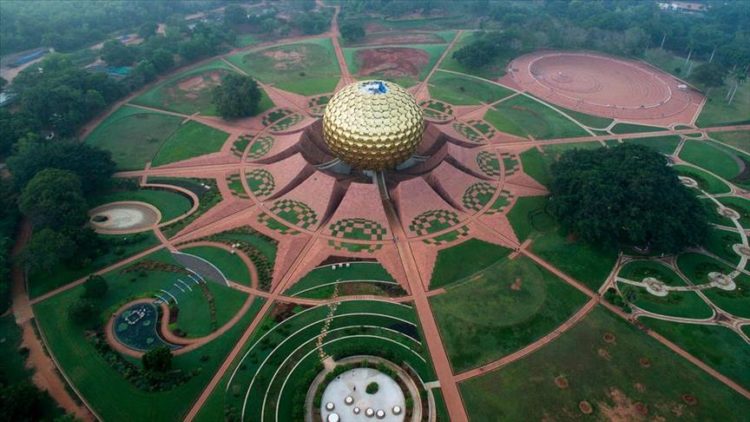 Auroville is an artificial and experimental township in the district of Villupuram, Tamil Nadu, with some parts of the town under the union territory of Pondicherry.

It was founded by Mirra Alfassa, popularly known as ‘the mother’ amongst her followers, who was a French spiritual guru, an occultist, and a collaborator of Sri Aurobindo Ghosh. The community was established in 1968 and designed by architect Roger Anger.

As stated by Alfassa, “Auroville will be a universal town where men and women of all nationalities, ages, and races will be able to live in peace and progressive harmony, above all creeds, all discrimination, all politics and all national boundaries.

The purpose of Auroville is to make people realize human unity”. This place is the epitome of tranquility and proves as the perfect escape for the people who find it hard to search for peace.

Today more than 2,500 people mostly Indians and Westerners reside here. They have organic farms, free schools, and ethical design studios, all subsidized by donations and the Government of India. When seen from above, the town is seen as swirls so as to look like a galaxy, a whole world in itself.

The Sri Aurobindo Society of Pondicherry, at its annual conference of 1964, passed a resolution for the establishment of a city dedicated to the vision of Sri Aurobindo. Mirra Alfassa was the president of the society at that time.

Alfassa believed the idea that ‘man is a transitional being’ just like Aurobindo Ghosh. Alfassa believed that this idea of an experimental universal township would contribute significantly to the progress of humanity towards its bright future by bringing together people of goodwill, hope, and aspirations for a better world. She also believed that such type of a township would contribute greatly to the Indian renaissance.

In the center of the town, you will find a golden metallic sphere called the Matrimandir. It was Alfassa’s idea to build it as a symbol of the answer to man’s aspiration for perfection by the divine. There is complete serenity and calmness in and around the Matrimandir and the area is called the Peace Area.

Inside the building of the Matrimandir, you will find a spiraling ramp that leads to an air-conditioned chamber of refined and polished white marble. The place is referred to as a site where one could find his/her consciousness.

The best way to experience the Auroville ashram is to actually just relax and sit in one of the cafes and talk to some of the residents here about their experiences of living in the city.

Also, Auroville Beach is one of the most popular beaches of the state due to its unadulterated beauty. The place does not have a lot of human establishments to ensure the town is not damaged by human encroachment.

Citizens from several different countries including Indians from 23 different states brought some of their native soil from their homelands while coming here and deposit it in a marble urn.

Currently, over 2,800 people from over 195 different countries have acquired the official residents of this township.

The Aurovilleans, as they call themselves, live together on the principles of peace, kindness, harmony, sustainable living, and divine consciousness which were the philosophy of ‘the Mother’.

Also Read:  Things To Do In Munnar, Kerala

5 Best Places To Visit In Kerala