The one national park that is visitor’s favourite in India is the Jim Corbett National Park. 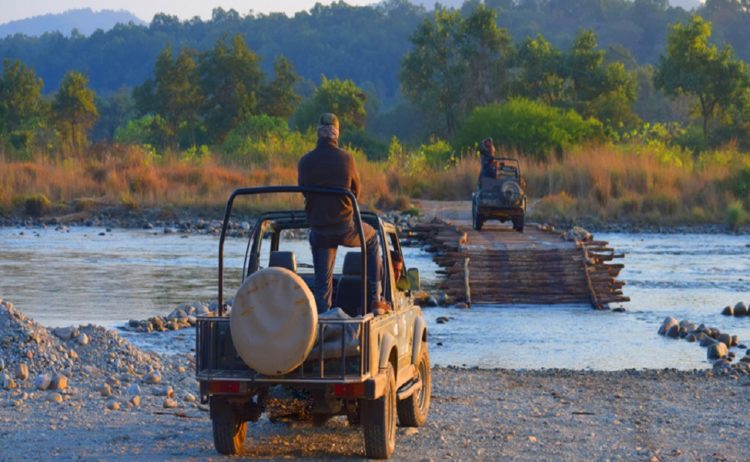 The park is famous for its rich wildlife as it is home to tigers, elephants along other smaller species. This is a complete travel guide for every wildlife lover who is planning a trip to Jim Corbett and wants to experience wildlife in its raw form.

Jim Corbett National Park is situated in the town of Ramnagar under the Nainital district of Uttarakhand. It is around 250 kilometers away from the national capital and would take you less than 6 hours of drive to reach here from Delhi.

The destination could also be reached by train or bus but the best mode would be to drive your own vehicle.

The park is named after James Edward Corbett who was a naturalist, hunter, and tracker born in British India. He was a well-known hunter who killed a number of man-eating tigers and leopards in India. The park was named after him in 1955 to honor his contributions.

The best time to visit Jim Corbett is during winters and early summer, that is, between October to April. There are different zones in the area and they have different timings. Some zones would allow tourists throughout the year while others would be open for travelers for a month or two.

Jim Corbett National Park is the most famous for Bengal Tigers; these majestic animals have been reportedly spotted by locals and officials as well. The forest department of India organizes jeep safaris for the visitors to explore the jungle and spot the wild animals including the Bengal Tiger.

The safaris start at 3000 INR per trip which will include 1 guide and 1 driver provided by the department itself. The safaris are done in green-colored gypsy cars so as to camouflage in the forest and ensure traveler’s safety. No person can drive their private vehicles here inside the forests and there are checkpoints at every zone to stop the same.

The national park is divided into 5 zones to maintain the tourist traffic. The jeep safaris are done inside these zones only. They are:

The most popular amongst the five zones is the Dhikala Zone. The zone is the largest and has reported the largest number of tiger sightings. You can easily spot elephants, deer, wild boar, and monkeys during your safari in this zone. The zone is open from 15 November to 15 June.

The second-largest zone, the Birjani zone is as beautiful as Dhikala with a peaceful ambiance. This zone is popular for tiger spotting. Moreover, this is the only zone where elephant safaris occur. The zone opens from 15 October to 15 June.

The Jhirna zone is located approximately 15 kilometers from Ramnagar. This zone offers two safaris in the day, one at 5:30 in the morning and the other at 3 in the afternoon. The zone is open throughout the year.

Just like Jhirna Zone, Dhela Zone also remains open throughout the year for visitors. The zone is famous for the dense forest of Sal trees along with grassland and water streams. You can also spot leopards alongside tigers and elephants here.

This zone is located in the northeast part of the national park. The zone is particularly famous for bird watching as it has different species of birds. The area of the zone is located on a hill which makes it more beautiful for nature lovers. It is open from 15 November to 15 June.

As Jim Corbett is a popular destination amongst travelers both in India and abroad, there are a lot of accommodation options near the park. From luxury resorts to budget hotels, you will have a lot of options to choose from.

These hotels are also near different zones of the park so that you can choose the location of your stay according to the zone that you want to explore.

There are some guest houses inside the zones as well that tourists can book with proper permission.

Why are Middle Eastern Airlines Successful?