If you are a beach person, you might have heard about the Marieta Islands. 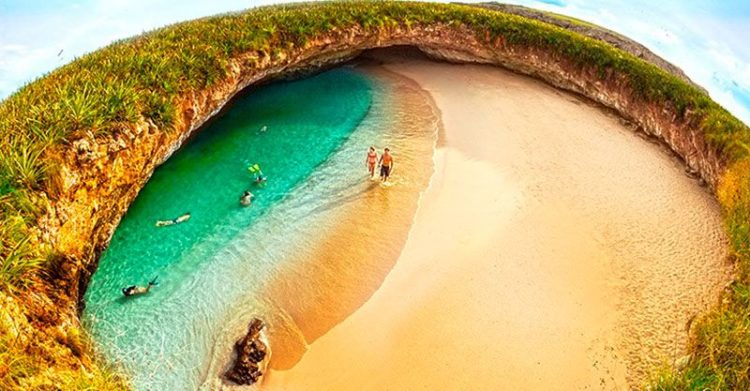 It is an uninhabited group of islands located a few miles off the coast of the state of Nayarit, Mexico. Popularly known as ‘the beach of love’, the Marieta islands is famous for its breathtaking landscapes, aquatic life, and popular cave beach.

The islands are also famous for their diverse marine life which includes dolphins, sea turtles, and schools of vibrant fishes, which can be spotted throughout the year. This is made possible as the islands are protected from hunting by the Mexican Government and is considered as an ecologic refugee.

Due to this protection, only selective tour operator groups are permitted to handle the tourists only in the specified zone.

The archipelago is itself a wonder that was formed by the volcanic eruptions and has now become home to more than 92 species of birds and more than 115 different species of fishes including the king angelfish.

The sea here is so crystal clear that even the depth of it can be clearly seen. You will be able to enjoy beautiful coral reefs and the wildlife on them as well.

The calmness and the serenity of this would transport you to a place away from all the anxieties and stress where you could just sit back and relax.

Apart from these scenic landscapes, the hidden beach attracts the most number of tourists to the Marieta Islands. Imagine a cave, with an open sky, where the white beach sand meets the crystal blue water of the Pacific Ocean.

This is exactly what the hidden beach looks like. But don’t make the mistake of thinking that these wonders are natural one. The opening of the hidden beach was most likely created a long time ago as a result of artillery tests.

The Marieta Islands were inhabited which makes them a perfect place for bomb testing during the initial half of the 20th century. But in the 1960s, scientist Jacques Cousteau began protesting the destruction of the islands’ ecosystem, and eventually, in 2005 the islands were christened Parque Nacional Islas Marietas. Once peace returned to the islands and everything became normal, the flora and fauna of the islands returned as well.

It would take you about 1 hour of boat ride to get to the Marieta Islands from the city of Puerto Vallarta. The environment ministry of Mexico, called the SEMARNAT, will require a small fee from you for the care of this protected area.

The only entrance to the islands is through a cave called the ‘cave of love’. The place is perfect for snorkeling as the water is warm, crystal clear and the depth is approximately eight meters. You would be able to easily spot schools of colorful fishes swimming beside you. Visit this gem of a place at least once in your life with your loved one.

5 countries that will be wiped off from the map soon: