Situated on the southeastern coast of the Indian peninsula, Andhra Pradesh is the seventh-largest state in the country. 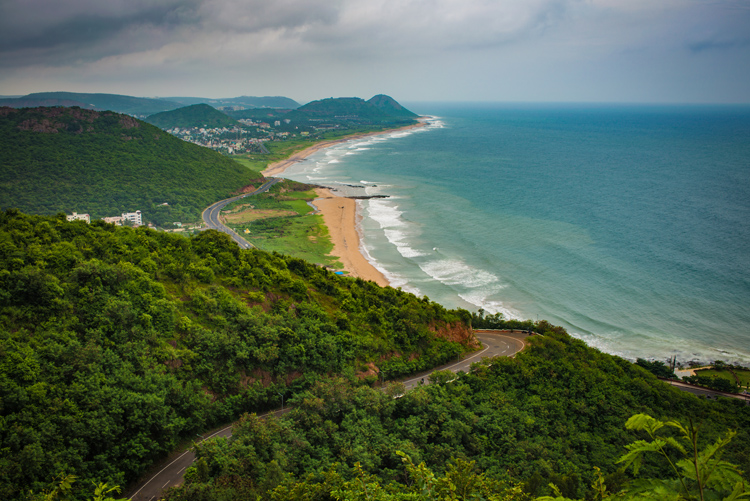 Situated on the southeastern coast of the Indian peninsula, Andhra Pradesh is the seventh-largest state in the country. The city of Hyderabad serves as the joint capital of Andhra Pradesh as well as Telangana since its inception in 2014.

The state of Andhra Pradesh is one of the oldest civilizations of India and was mentioned in Sanskrit epics like the Mahabharata.

Andhra Pradesh has been ruled by a lot of empires which include the Maurya Empire, the Ikshvaku Dynasty, Pallava, Rashtrakutas, Chalukyas, and Later Cholas.

The state is well promoted by the tourism of Andhra Pradesh as the place sits in the Eastern Ghats with some grand temples and picturesque rivers.

Here are our top 5 places to travel to in Andhra Pradesh.

Visakhapatnam, popularly known as Vizag, is one of the oldest port cities in the country. Nestled in the center of Andhra Pradesh, Visakhapatnam is known for its picturesque beaches and scenic landscape, as well as its rich history of cultural past.

Vizag is home to a lot of beaches along its coastline, with the most famous one being Yarada Beach. If you are someone who loves history, then Borra Caves are one of the best tourist attractions that Vizag has to offer for you.

Located in the Chittoor district of Andhra Pradesh, Tirupati is most famous for Lord Venkateshwara Temple, one of the most popular pilgrimage sites in India. Tirupati is one of the oldest cities of India and the mention of this city could be found in plenty of ancient Vedas and Puranas.

Tirupati has a lot of unique geological wonders that you shouldn’t miss out on. The Silathoranam is a natural arch formed out of rocks and is situated at the Tirumala Hills.

Araku Valley is a comparatively less explored hill station and is mostly visited just by the locals as a weekend getaway. It is situated some 120 kilometers away from Vishakhapatnam. Situated in the green hills of Eastern Ghats, the valley is home to a few tribal caves and the Museum of Tribal Arts.

This place is quite famous for its amazing coffee, whose subtle aroma will make you crave a cup. In addition to this, you can also try some adventure activities, like trekking, here.

Set amidst the Eastern Ghats, Ananthagiri Hills is a beautiful weekend destination 90 kilometers away from Hyderabad city. Arguably considered one of the earliest human habitat areas, Ananthagiri is a hill town dotted with ancient caves, medieval fort palaces that showcases the history of the area, and some grand majestic temples.

The place offers some of the best trekking trails and thus serves as a paradise for adventure lovers. Breathtakinglymesmerising, the town oozes out charm mixed with the aroma of coffee and the beauty of exotic flora.

Lovingly known as the ‘Grand Canyon of India’, Gandikota is a twee village in the Kadapa district of Andhra Pradesh.

Placed in between the River Pennar on the right side, the village is popular for the stunning gorges formed by the river cutting through Erramala Hills.

Located 1.5 hours away from Belum Caves, the highlights of the village of Gandikota are the ruins of a 13th Century built Gandikota Fort. The fort also offers scenic views of the hills and valleys below.